Lulu Yurigasaki (百合ヶ咲 るる Yurigasaki Lulu) is the second titular heroine of the series. She is another bear who transferred in alongside Ginko Yurishiro and she is the former princess of the Bear Kingdom, but after her jealousy drove her little brother to his death, she decided to help Ginko fulfill her quest for the promised kiss. She is killed by the Invisible Storm while defending Ginko and reunited with her brother, Milne in the afterlife.

In the manga, she introduces herself as Ginko's childhood friend and alleged "lover" who once served under her as a maid, but Ginko apparently has no memory of this. Lulu is much more eccentric in the manga, and views Kureha Tsubaki as a rival for Ginko's love, though the two become friends anyway. Similar to her anime counterpart, she feels burdened over the death of her brother.

Lulu has reddish-brown hair that is styled into two twintails with bangs swept to the left side and teal eyes.

She wears a green variant of the school's uniform and white boots. Her jacket is left unbuttoned to reveal a black vest underneath. Her standard uniform hat is also slightly modified using a green ribbon as well as having 3 decorative badges pinned on top, which is a yellow circular badge, a green badge shaped like a teddy bear, and a pink badge that is shaped like a heart.

In her human-bear form, she wears a green skirt with frills at the end and an apron, a frilly white headband, a green bow around her neck, and a green and black top. As a bear, Lulu is reddish-brown and wears the same headband she wears in her half-bear form, as well as a bib.

Lulu has a very upbeat and outgoing personality, and tends to keep a positive outlook. She is very affectionate towards Ginko Yurishiro, and even Kureha Tsubaki in some instances. Lulu is always doing everything she can in order to help Kureha and Ginko. She often says "I'm so clever!" Flashbacks reveal that she had had a much more selfish and attention-hungry personality as a child, but this changed after the death of her younger brother, which she felt responsible for and burdened by.

At the end of episode 12, Lulu can be seen in the afterlife reading the ending of The Moon Girl and the Forest Girl to her brother, Milne. Milne asks her what has happened to Ginko and Kureha after they escaped past the Wall of Severance, and Lulu says no one knows before asking him what he thinks. He says he's not sure either before stating that he has realized something - he could have just given her the Promise Kiss himself the entire time, which he punctuates by kissing her on the cheek, surprising her. Lulu smiles and promises that the two of them will always be together from now on. Milne says he loves her, and Lulu admits the same. 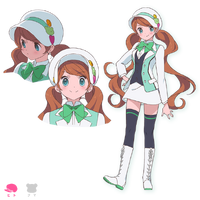 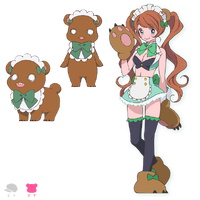 Add a photo to this gallery
Retrieved from "https://yurikumaarashi.fandom.com/wiki/Lulu_Yurigasaki?oldid=5555"
Community content is available under CC-BY-SA unless otherwise noted.