Kureha Tsubaki (椿輝 紅羽, Tsubaki Kureha) is the main protagonist of the series. She is a second year student at Arashigaoka Academy who has a strong hatred of bears after Reia Tsubaki (Kureha's mother) was killed by one. She was in love with Sumika Izumino (Kureha's friend) who is eaten by bears and she is defiant about making other friends. After forming a friendship bond with Ginko Yurishiro with the yuri approval from the Life Judgement Guys, Kureha is transformed into a bear by Lady Kumaria and delivers to Ginko her promise kiss. Kureha and Ginko are last seen heading on a journey beyond severance; Lulu states that no one knows what has happened to them afterwards.

In the manga, she is a shy girl who wears glasses and a ponytail. She opens up more and abandons the glasses and ponytail after meeting Ginko, who shows up frequently in her dreams as a bear person after her transfer to Arashigaoka Academy. She soon falls in love with Ginko and becomes determined to help find the cause of her suffering, while also figuring out how her mother died.

Kureha has grey-blonde hair and violet eyes. She wears the school's regular uniform with a black necktie. Her hair is parted down the middle, but unstyled. The rifle used by her (and other people) in the anime is a scoped Remington 750 Woodsmaster with custom inlays in the grip of the stock.

Kureha is not very open to others, but she is a very affectionate and caring girl to those close to her. 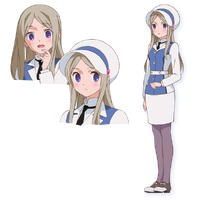 Ending scene. Kureha is first on the left.